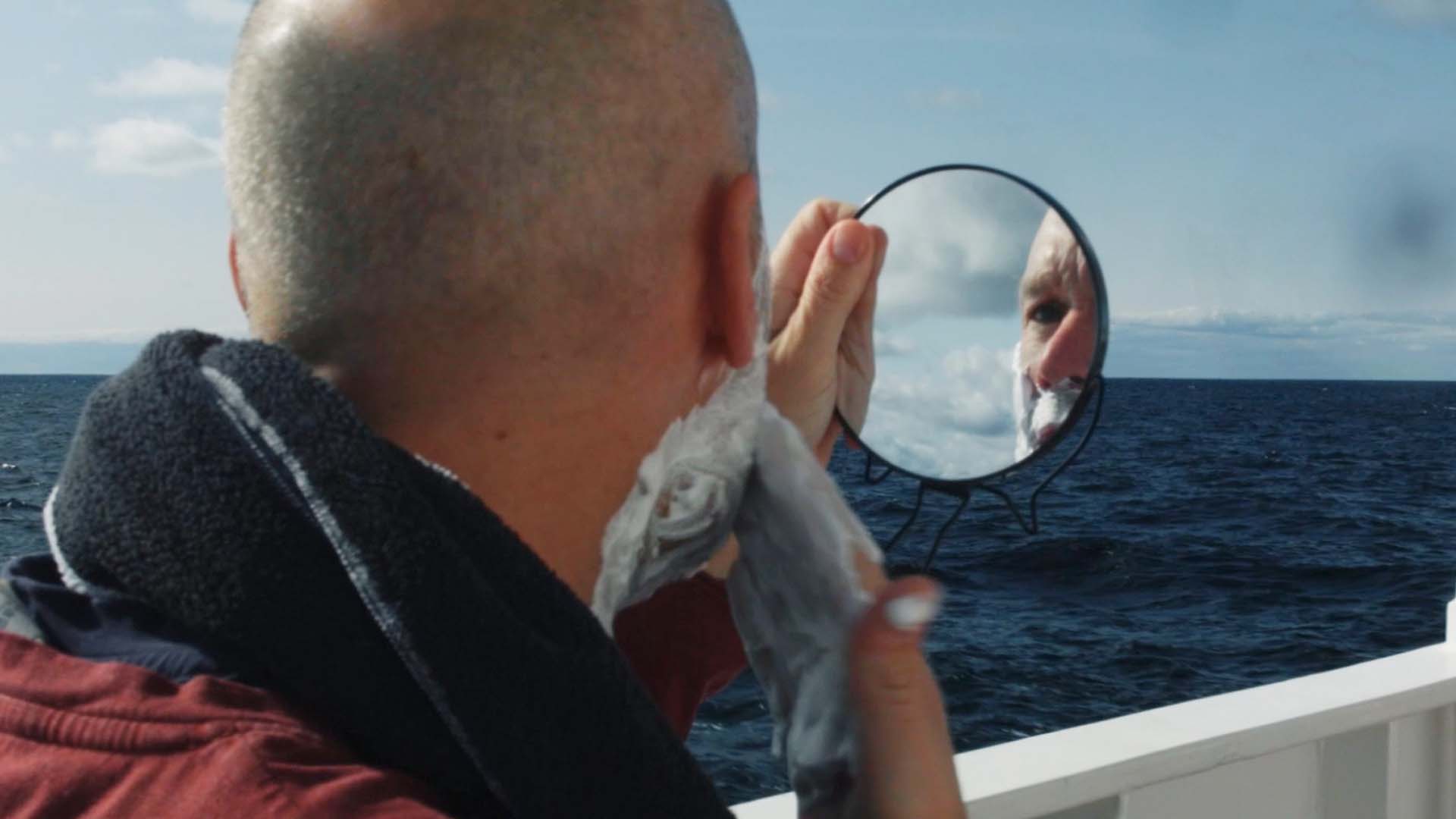 A ship drifts in the middle of an endless sea. Aboard we find a crew of five: three Dutchmen and two Filipino sailors. They all cope with boredom - some by trying to overpower it; others by escaping into a parallel world, guided by dreams. elephantfish lures its viewers into an enclosed environment, guarded by the freedom of the everlasting horizon. The only escape from this confinement comes in thoughts and dreams.

Darkness can be mysterious and scary, but also mind-provoking and triggering for one’s fantasy. Elephantfish, a film as unusual as its title, starts with the description of an equally peculiar dream narrated by a quiet voice in the background of the black frame: an elephant in the sea greedily drinks the water as if trying to swallow it all. As soon as the dreamer gets closer to the monster, it gets smaller and smaller, no bigger than a fish. Instead of turning into a Leviathan1 as the quasi-mythological premise of the tale suggests, it eventually dies, and the film itself unfolds in a hardly expected way.

This parable-like story is a departure point for Meltse Van Coillie’s film, which, in combination with the darkness of the black screen, becomes a clean slate on which one can invent an ample of fantastic scenarios. The images generated by the viewers in those unlit opening minutes will accompany them throughout the further perception process, mixing imaginary pictures with what really happens on screen. elephantfish invents a liberating space for personal interpretation of the oddities that will occur next.

The action is now visually, not only virtually, taking place on a heavily loaded industrial ship and the camera generously lets the spectators in, so that they feel part of the crew. That’s actually how the film team set it up for themselves as well: the “boutique” environment aboard is recreated en petit comité – the director Meltse Van Coillie and the cameraman Harm Dens (also partners in life), just the two of them, merged with the sailors by starting living side by side with them in the middle of the sea, in order to experience their journey from within, and to persuade them to participate in the cinematic adventure, which happens to be Van Coillie’s graduation film. Such an approach explains the conquering identification one can feel with the authors’ ambiguous eyes. Eyes of observers who constantly step in and out of the ship’s inhabitants’ shoes without necessarily imposing a clear point of view on those who are watching from the other side of the screen.

I also identified immediately with the environment in a semi-conscious, irrational way. As if I jumped into the viewpoint of a prisoner for whom the outdoor freedom is equally desirable and useless because it remains untouchable. The isolation within the vessel is striking and captivating; only the pictures of a newborn that a sailor is looking at on his cell phone remind of the busy life buzzing outside. Two other sailors, identically equipped in yellow smocks, execute tedious repetitive tasks in line with the blue monotony around them. Their mission is to constantly paint the deck in order to prevent the rust from “eating” their living space and taking over. However, not rust but another more powerful force will conquer them from within, and will liberate them from the prison of the pointless Sisyphean labor. Is it the providence that arrives to save the sailors, or their own boredom of contemplating life instead of living it, that provokes the swelling mass of sand to erupt from the bowels of the ship and fill in the voids of their solitude? Is the fabula what matters most at the time of interpreting the film, or rather its hypnotic instrumentarium in the first place, using the oscillating sea as a pendulum?

From the first sequence after the dark opening, one’s gaze is invited to wander around this floating surface on the ocean. A limited area amidst enormity, while the waterscape out there, with the unreachable horizon, suggests infinity and eternity, both scary and mysterious, like the impenetrable darkness at the start. The sight of something immense and unruly such as the water element in all its glory, together with the phantasmagoric creatures that might be hiding beneath its surface whose imagery has been nurtured by myths and legends over the centuries, calls out cosmogonic associations.

At the same time, the cinematic mise-en-scene is a space of contrasts. Incommodious and stuffed ship cabins oppose the frightening freedom оutside — claustrophobia and agoraphobia go hand in hand. The visual purity in the clean exteriors and the asceticism of the interiors are impactful, only the most necessary is disposable. The pacing allows enough time to explore each detail without the necessity to rationalize. Those objects, people or movements inhabiting the space are part of the film’s texture and mood — like in an expressionist painting.

Horror vacui is a Latin expression signifying the fear of empty spaces, like the one that ancient Greeks must have experienced when facing those large areas waiting to be filled in with buildings. The term refers specifically to the act of leaving a gap in artistic composition. Here, exploration of the void on one hand implies emotions such as fear and anxiety. In their minds, the characters might have invented the Big Bang on their ship, a little private apocalypse that they prefer to the mundane reality and the neverending exhausting routine. On the other hand, Van Coillie does not forget that a void can lead to possibilities too. Getting immersed into the void can be an exciting challenge for imagination to originate various realities, a different one in each viewer’s head.

From the black screen beginning to the multi-interpretable ending, empty spaces fill this slow cinematic piece of art. Van Coillie doesn’t care about stuffing the gaps with answers, nor does she ask questions. Dreaming is a priority, an exercise for which empty spaces are more than welcome. 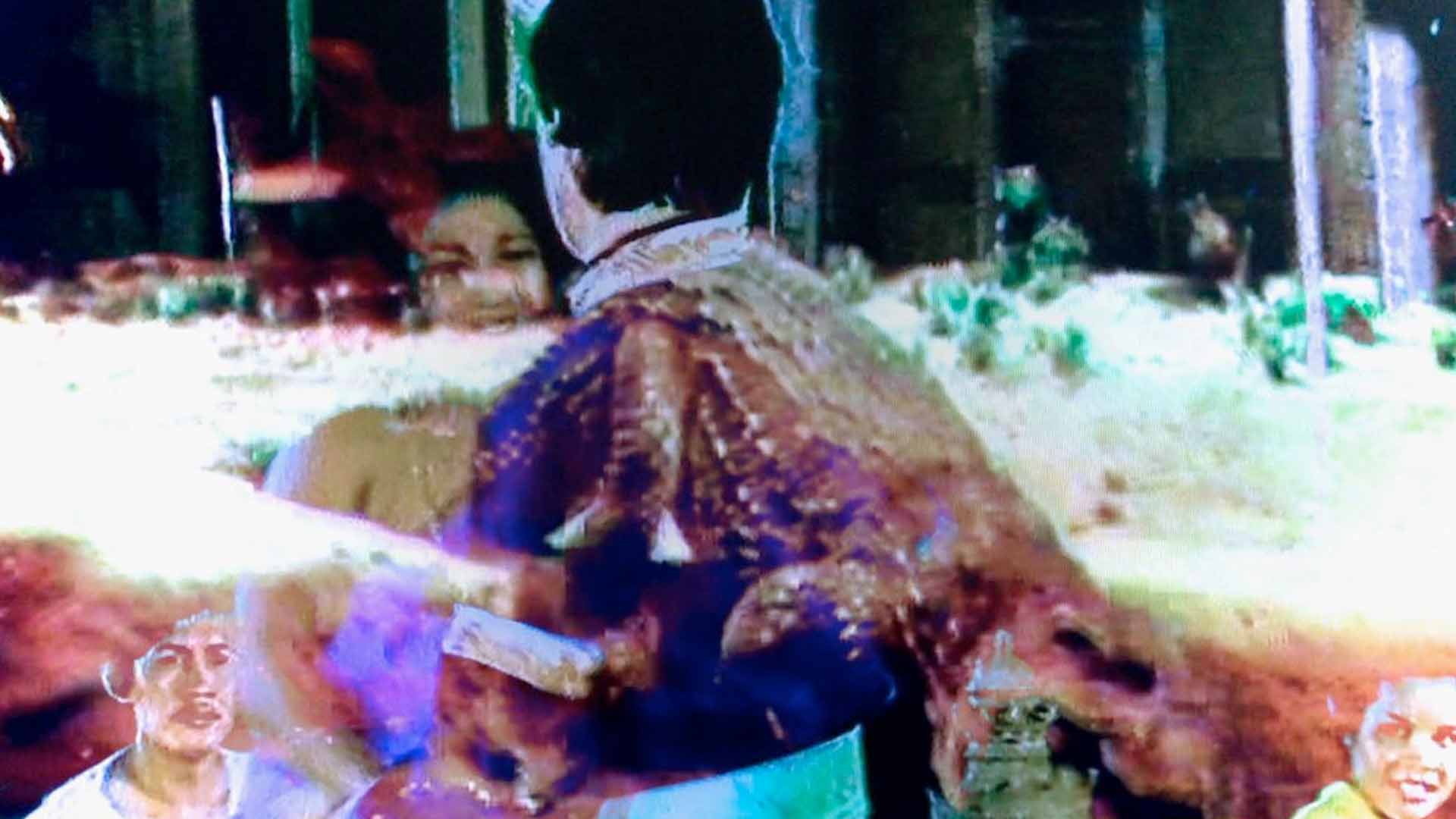 A meditation on the fin de siècle in Thailand.