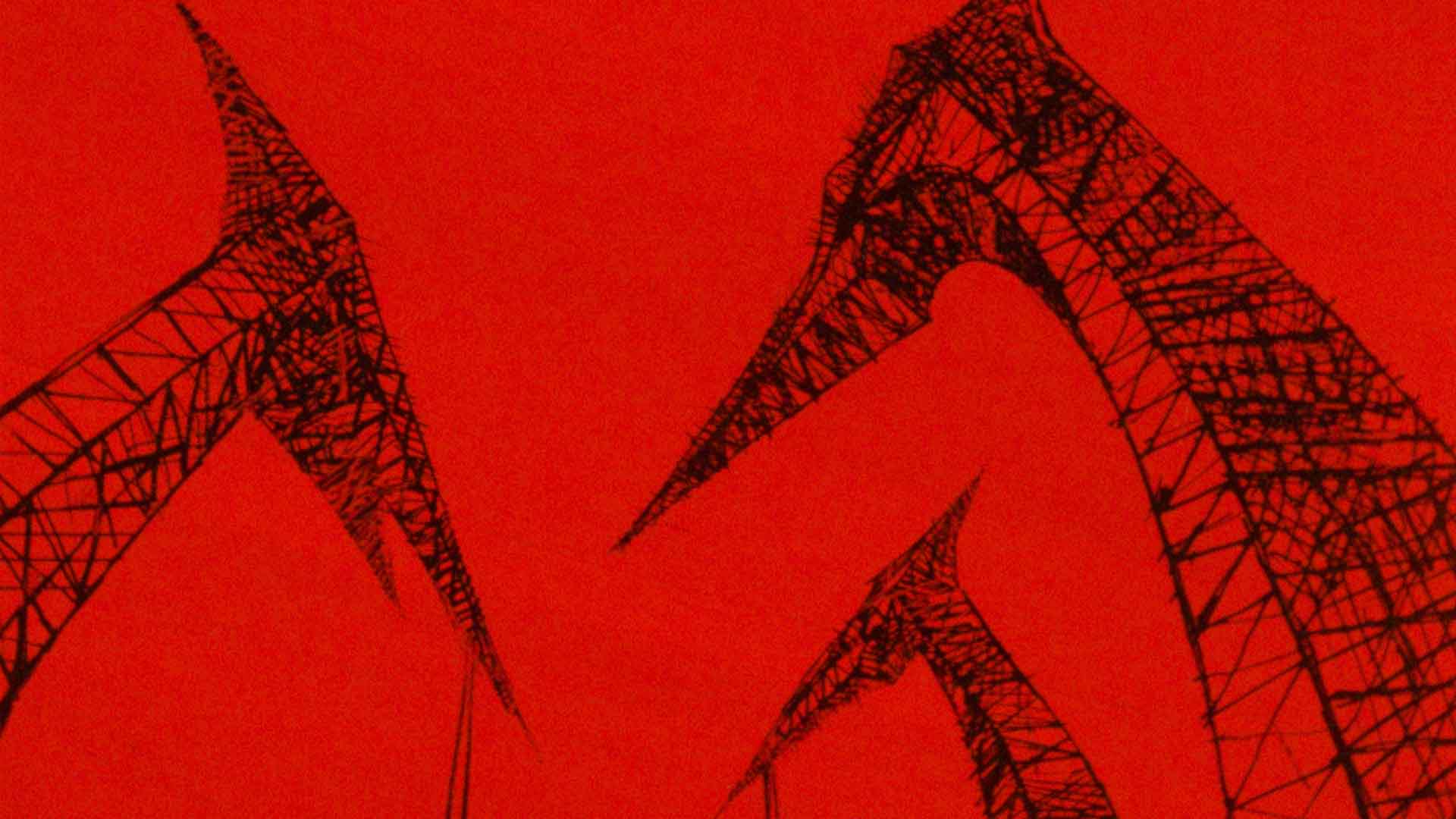 Monstrous cranes and prehistoric flying reptiles dominate an inhospitable seaport. Only a lonesome angler is tolerated there as a human being. He becomes a witness to an eccentric idyll between a cabin boy and a mermaid. Dream or reality?

Glaring sirens herald Sirens, the fifth work of painter and animation pioneer Raoul Servais. A stark contrast with the sweet voiced mermaid, the actual siren of the story. The mood for the surreal, mechanically controlled harbour city, the backdrop of the story, is set. Perhaps it is Ostend, birth town of Servais, perhaps it is every other small, beaten up harbour town anywhere else in the world.

Early on in the film, Servais employs the boundless possibilities of animated film to portray a surreal scene: two cranes squabbling over a wooden container. The container drops and breaks. Its content: a pile of rocket bombs. War is the central theme in many of Servais’ films (Chromophobia, Operation X-70, Tank), here, however, it seems to only casually add to the dystopian world. The future has been devoured by war and industry. Literally devoured: a lonely fisherman catches nothing but fish bones. He looks deeply saddened.

Suddenly, the sound of dreamy flutes catches his ear. The fisherman is witness to a wonderful scene. The blood red backdrop shifts to a seemingly moonlit blue. This is how Servais introduces an explicitly other alternate world where, just like in his Golden Palm awarded Harpya (1979), a hybrid mythical creature enchants her opponent. A cabin boy, consciously rendered in soft contours, plays the flute to resurrect his loved one. According to legends, the stunning yet evil siren lures the cabin boy to the bottom of the sea. This is not the case here, however. She supplies wind in the ship’s sails and offers a way out of the hellish town. The mechanical vultures, guarding the city, are alarmed. The sky turns red once more, a highly suspenseful arch follows until the mermaid is captured by a crane and later falls to her death. A new type of vulture presents itself: an army of police officers, investigators, photographers and coroners rush to the scene.

This central scene exemplifies Servais mastery. The rhythmic game of shapes appears natural and spontaneous, but be mindful: even the smallest movement in animated film is a conscious choice. Almost every frame is part of an inventive transformation. The black clothed, skeleton-like men merge and form into one entity. This theme of uniformity was present in Servais’ previous animated film, Chromophobia (1966), where soldiers formed one immobile front, and reappears once more in To Speak or Not to Speak (1970).

This merging is more than just form. It also addresses ‘the powers that be’. Though the scene is steeped with humour, it also confronts us with injustice (the random arrest of the fisherman), greed (the zoologists and coroners would rather chop the mermaid in halve than allow the other to take her) and boastfulness (the detectives pose with the mermaid’s corpse). By comparing these men to a dinosaur, Servais mocks the conservative patriarchy.

Raoul Servais is known for his diverse style and techniques. On the level of content, however, we see more homogeny. His work often addresses materialism and injustice and can be read as an ode to peace, or in this case, love. Just like in De Valse Noot (1963), Chromophobia and To Speak or Not to Speak, this film portrays a dystopian world that is coloured by the hopeful ideals of individuals. The cabin boy perseveres in his music and thus remains connected to the mermaid, of whom nothing but chalk tracings remain.

In Sirens, Servais adamantly opts for magic as an antidote to a mechanised society. The backdrop shifts to blue once more. The moon casts a magical light on the pair that ascend to heaven. Is there anything more beautiful than love?

A marvellous menagerie of monsters, plucked from the imagination of Mr. P. N. K. Panicker of Kerala, India, a top-notch teller of tall tales.